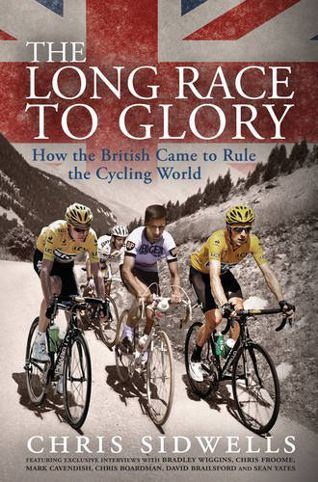 The Long Race to Glory

This is a history of British cycling, right from the first ever bike race in a Paris park in 1868, which was won by a British racer, James Moore, to the Olympic success of the 2000s, the many victories of Mark Cavendish and the Tour de France wins of Sir Bradley Wiggins and Chris Froome. Plus all that happened in between.

It’s written with the help of exclusive interview with all the major players of British cycling over the years, from pioneers like Brian Robinson and Barry Hoban to Wiggins and Froome. And it examines how and why British cyclists from different eras achieved that they did, what helped them and what they had to overcome.

“Chris Sidwells has all but achieved the holy grail of sports writing in being able to satisfy the interest of the cognoscenti while managing not to lose the attention of those with either a passing interest in cycling history or simply a rudimentary grasp of its technicalities. He has also managed to weave the rudiments of cycle development across the decades without ever becoming tedious or more involved than his narrative demands.”